Fill out the form below to receive additional information about our Press Room or give us a call at 800-543-8917.

As sea ice continues to diminish, Polar Bear numbers and health are being impacted.

Small gestures, when multiplied, can count. And reducing the energy expended on heating and cooling, even by a couple of degrees, can make a difference for polar bears.

Natural Habitat Adventures supports the Thermostat Challenge, an initiative of Polar Bears International to draw attention to the challenges polar bears face in a warming Arctic. As sea ice, which the polar bears rely upon to hunt seals, continues to diminish, the bears’ hunting season is getting shorter, and their numbers and health are being impacted. 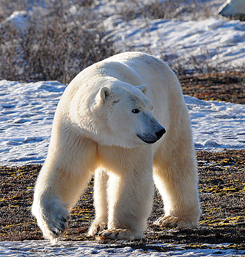 Witnessing polar bears in their native habitat also helps raise awareness of their plight. Nat Hab, a pacesetter in conservation-focused wildlife tours worldwide, runs eight different polar bear-focused trips. Seven itineraries are based in Churchill, Manitoba, often called The Polar Bear Capital of the World. Churchill is home to the Southern Hudson Bay polar bear population, and more bears congregate each fall than anywhere else, making this easily accessible destination the prime place to see polar bears in the wild.

Among Nat Hab’s Churchill polar bear tours are the Classic Polar Bear Adventure, the company’s flagship tour; the new Churchill Arctic Family Adventure that takes place over Thanksgiving break; polar bear photography safaris guided by an Expedition Leader who is both an Arctic naturalist and professional nature photographer; and the Tundra Lodge Adventure, where guests stay among the bears in the world's most remarkable rolling hotel—right on the tundra Itself.

Nat Hab has also just announced a brand-new polar bear viewing adventure in Alaska’s Arctic National Wildlife Refuge, a photography expedition based in Kaktovik on the Beaufort Sea in August 2017. 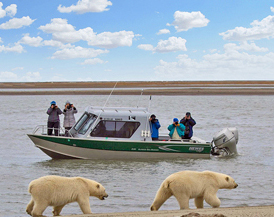 The expedition, Photographing Polar Bears in Alaska's High Arctic, debuts with three departures for eight guests each: Aug. 21-27, Aug. 24-30 and Aug. 27-Sept. 2. Similar dates are tentatively set for 2018. The per-person double rate is from $10,895. Guests fly by chartered plane over the Arctic Circle before landing on Alaska's North Slope on the edge of the Beaufort Sea at 70 degrees north latitude. This immersion in the far north provides an unusual chance to witness the impacts of climate change from the frontline while learning about how it is impacting polar bear behavior and challenges to the age-old subsistence lifestyle of local Inupiat people.

Travelers can also look for polar bears in Svalbard, the High Arctic archipelago that belongs to Norway, on an 11-day expedition cruise operated by Nat Hab’s partner Lindblad Expeditions. Land of The Ice Bears: An In-Depth Exploration of Arctic Svalbard, departs May 29, June 5, 12 and 19 in 2017. In 2018, departures are May 23 and 30. The per-person double rate aboard the 148-guest National Geographic Explorer is from $10,220. 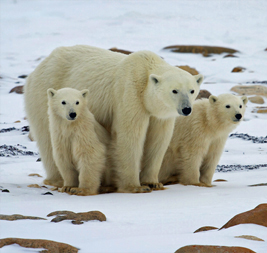 The itinerary is flexible by design in order to accommodate local conditions and pursue prime wildlife watching in the best locations. Guests cruise for six days among the icebergs that drift along Svalbard's rugged coast, utilizing an onboard fleet of Zodiacs to get close to the shoreline and access land for guided hikes. The focus is on polar wildlife, and while polar bears are a top draw, guests will also look for drifting seals, noisy herds of walrus, reindeer on the move and the elegant Arctic fox. Guests travel with Lindblad’s staff of Arctic naturalists and polar bear experts.

The Thermostat Challenge
Even one day of lowered thermostats helps reduce carbon emissions that cause global warming, which is melting the sea ice on which the polar bears depend. Purchasing programmable thermostats and taking steps to reduce energy consumption all year round are also shared goals. Being more energy-efficient at home can make a big difference: heating and cooling account for roughly half the energy consumption in an average home, according to the U.S. Environmental Protection Agency.

Get Weekly Updates
Our weekly eNewsletter highlights new adventures, exclusive offers, webinars, nature news, travel ideas, photography tips and more.
Request Your 2022 Catalog
View Our 2022 Digital Catalog
Send Us a Message
Use the form below to send us a comment or question.
Refer a Friend
Earn rewards for referring your friends! We'd like to thank our loyal travelers for spreading the word. Share your friend's address so we can send a catalog, and if your friend takes a trip as a first-time Nat Hab traveler, you'll receive a $250 Nat Hab gift card you can use toward a future trip or the purchase of Nat Hab gear. To refer a friend, just complete the form below or call us at 800-543-8917. It's that easy! See rules and fine print here
/about/press-room/press-releases/natural-habitat-adventures-encourages-taking-your-temperature-in-observance-of-international-polar-bear-day/
Physical Requirements