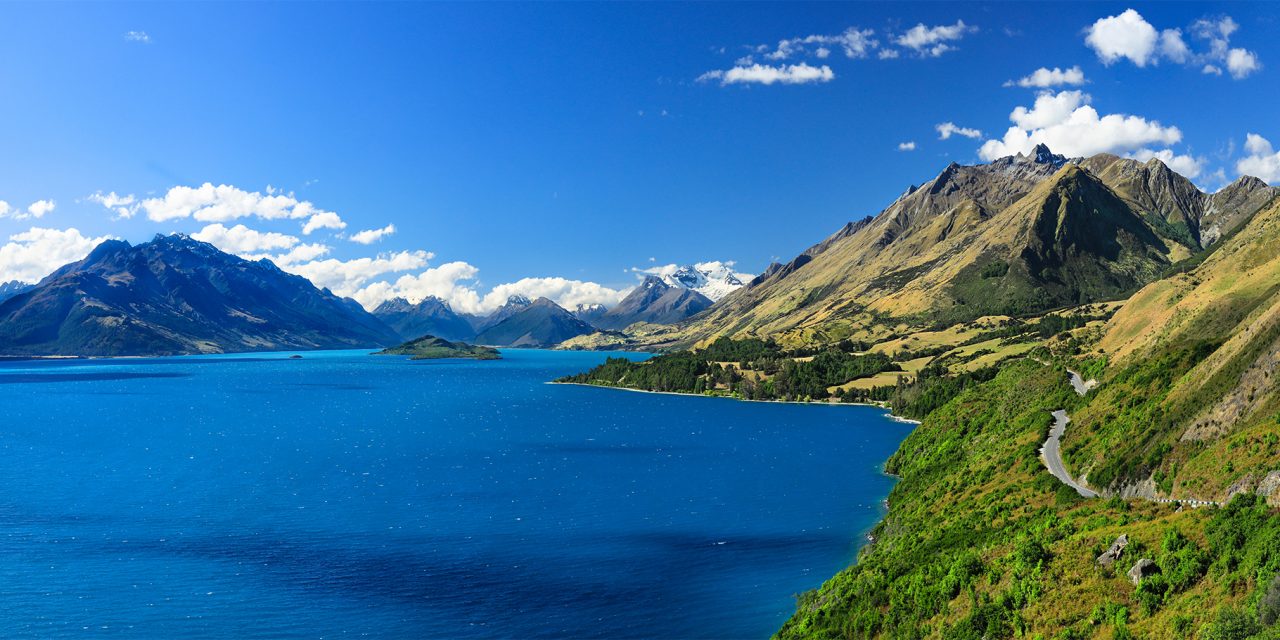 In New Zealand, Māori legends that tell the tales of how the landscape came to be abound. One such story describes a giant supernatural creature whose body ignited in flames while he was sleeping, creating an S-shaped trough that was thousands of feet deep. This is the South Island’s Lake Wakatipu, a stunningly scenic lake that is said to still bear the giant’s beating heart. Its thumps are evident in the rhythmic rise and fall of the lake’s waters, visible even today.

New Zealand is actually home to hundreds of lakes, many carved by glaciers millennia ago and with backdrops of pristine forests and towering mountain peaks. Some of its most spectacular bodies of water dot the country’s South Island, sparkling amid lush green cliffsides and alpine valleys. Nat Hab’s New Zealand Nature Explorer takes travelers to more than a handful of these sapphire beauts to experience endemic wildlife, incredible vistas, and activities from kayaking to guided night hikes.

Here are some of our favorite South Island standouts.

Tucked away in the southwest corner of New Zealand’s South Island, Lake Te Anau is the island’s largest lake (and the second largest by surface area after Lake Taupo), a spectacular glacier-fed stretch that covers 133 square miles and reaches depths of up to 1,368 feet. The bulk of the lake lies within both the Te Wahipounamu World Heritage Site and Fiordland National Park, where granite cliffs, deep valleys carved by ancient glaciers, and mist-heavy waters are the norm. Lake Te Anau’s western side sports a trio of breathtaking inland fiords, as well as the limestone Te Ana-au Caves, sparkling with bioluminescent glow worms and featuring their own subterranean waterfall. 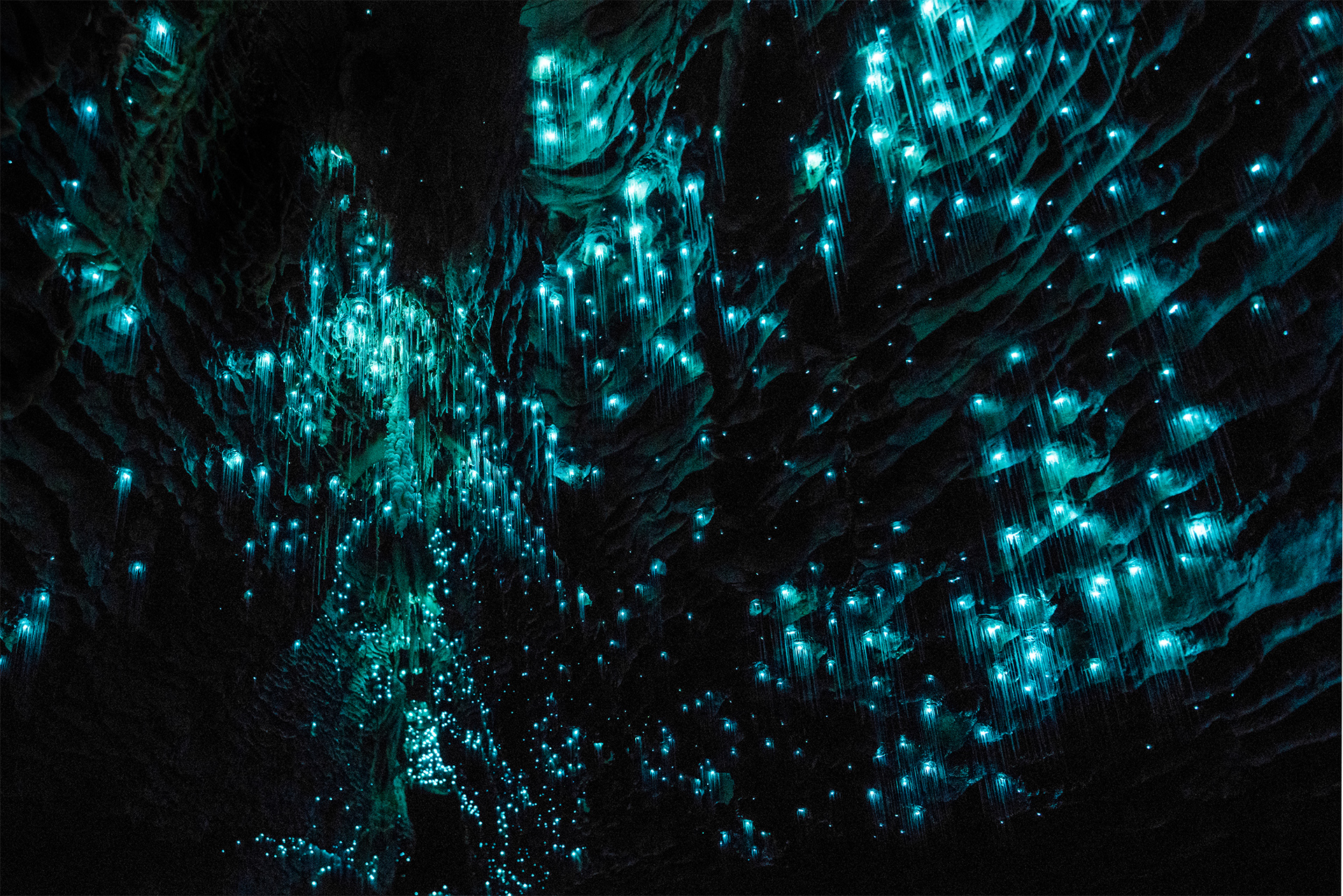 At the lake’s southern point sits the Te Anau Bird Sanctuary, where you can visit with endemic takahē, a rare flightless bird recognizable by its large red bill, and dark blue-green plumage. Other often-difficult-to-spot avians such as ruru koukou and kākā (a relative of mountain parrots), reside here as well. 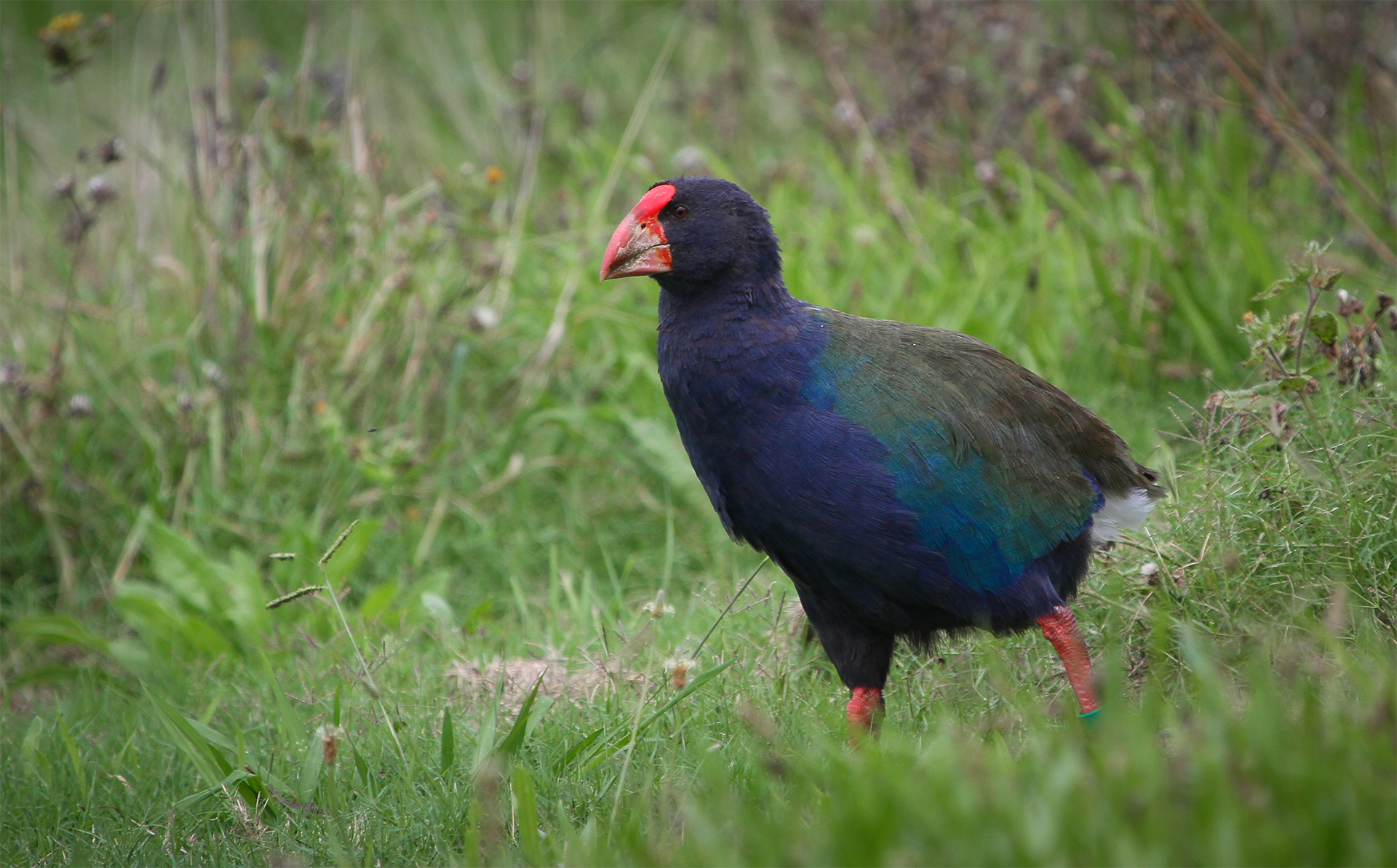 Lake Te Anau also happens to be the starting point for two of the country’s Great Walks. The iconic 33.2-mile-long Milford Track begins at the lake’s northern tip, winding through rain forest, across wetlands, and over an alpine pass, while the circular 37-mile Kepler Track, awash in vast fern forests, starts at the south. 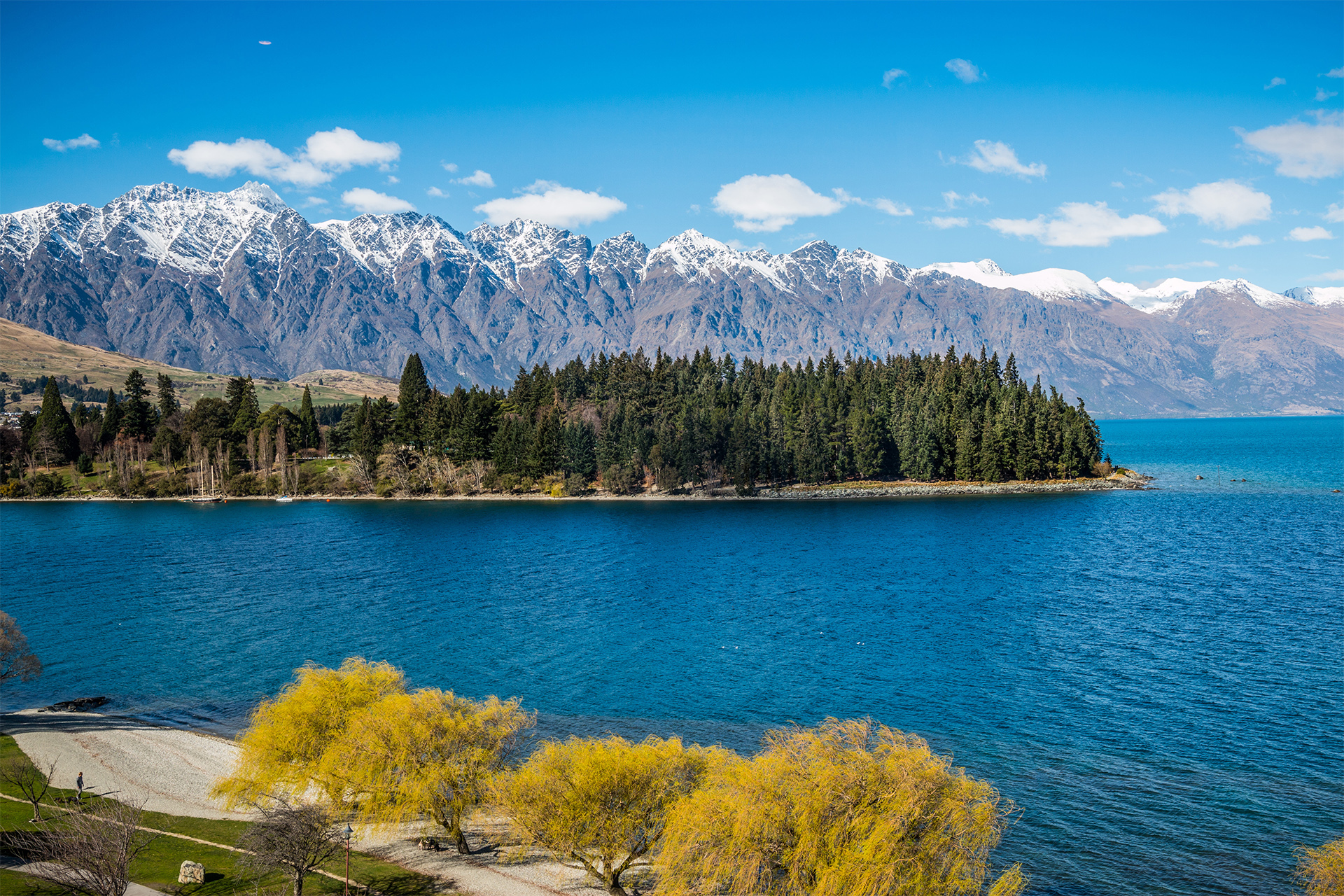 Hailed for its dramatic (as well as unobstructed) views of New Zealand’s Remarkables and Hector mountain ranges, Lake Wakatipu served as the mythical Lothlórien woodland in Peter Jackson’s Lord of the Rings trilogy. The lake is what’s known as an inland finger or fiord lake, meaning it sits within a deep glacier valley. It’s the country’s longest and third largest lake, a 50-mile-long, 112-square-mile waterbody nested within the southwest corner of the South Island’s Otago Region.

Bungee jumpers, paragliders, and skydivers descend into Queenstown—the country’s Adventure Capital—which sits upon the shores of the lake’s S-bend, while imbibers head to the nearby wineries for sips of pinot noir and riesling with stellar scenic views.

New Zealand falcons, small and greenish bellbirds, and honey-eating tuis all frequent the area and its waters, which are brimming with rainbow trout, salmon, and endemic longfin eels.

Keep an eye out for the vintage Kingston Flyer steam train chugging along the lake’s southern end on Sundays, October to December. 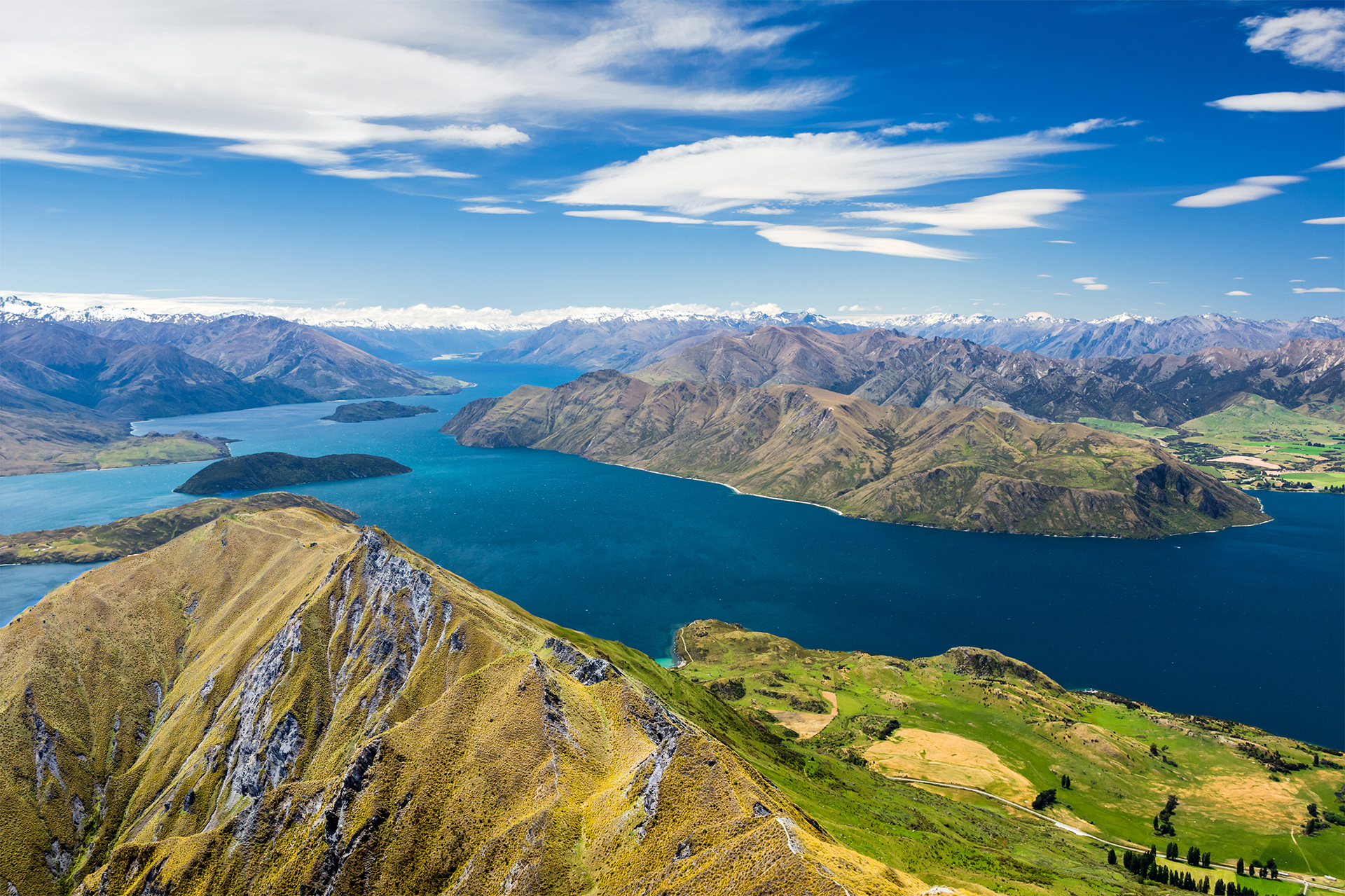 The name Wānaka translates to “renewal of the soul” in the Maori language, and indeed, tranquility and revitalization are among Lake Wanaka’s many offerings. This is New Zealand’s fourth-largest lake, 74-square-miles of clear blue waters sitting within a U-shaped valley in the South Island’s Otago region.

Most visitors to the region utilize Wānaka, a ski town and summer resort town perched along the lake’s southern shore, as their base. It’s just a short walk to the lone ‘That Wanaka Tree.’ Sadly, this photographer’s favorite was recently vandalized, but it still looks like it’s growing right out of the water. Mount Aspiring National Park, a World Heritage Site and absolute Shangri-la for both hikers and mountaineers, is just a short driving distance. 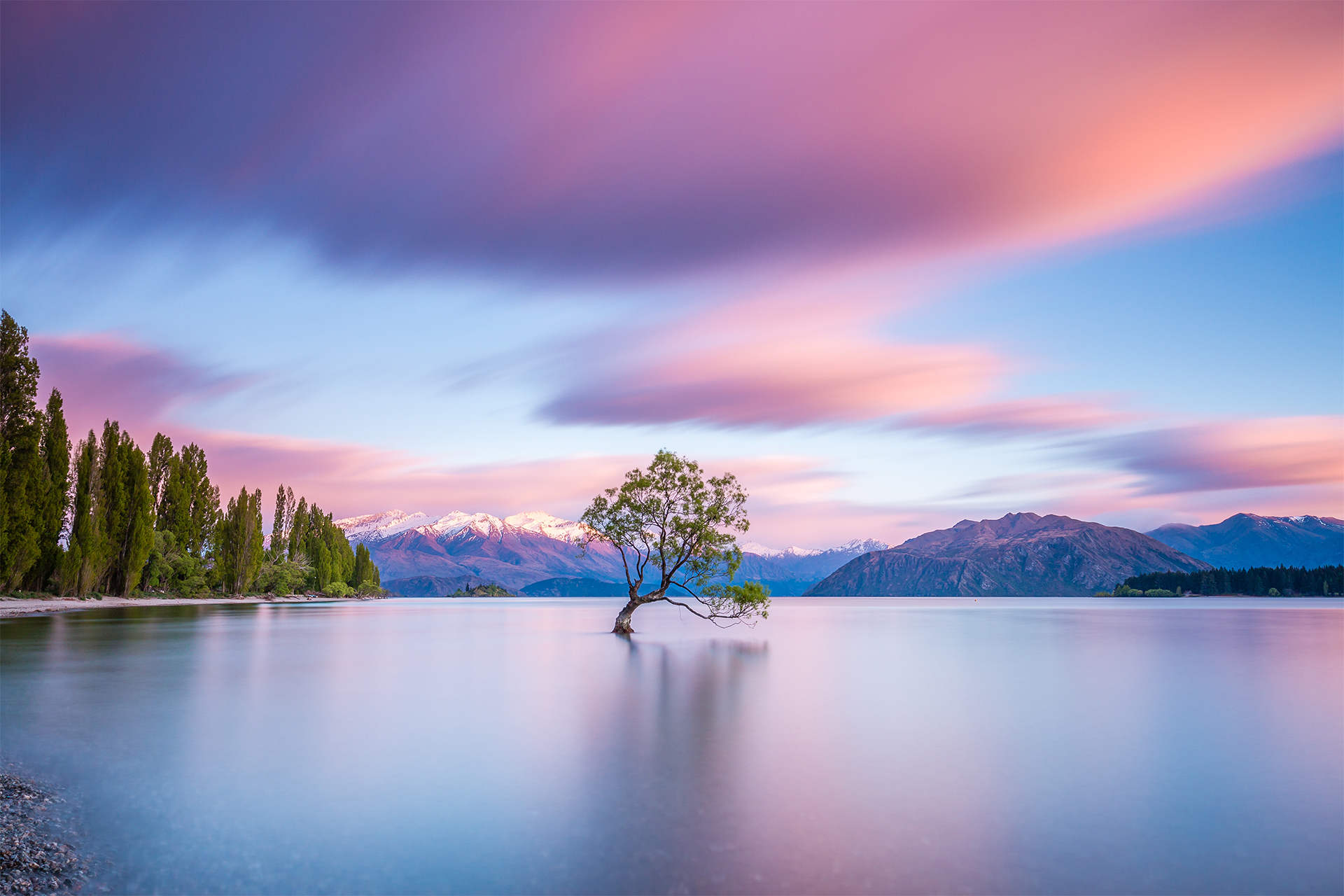 Back in 1973, the New Zealand government enacted the Lake Wanaka Preservation Act, to protect and keep the lake’s natural state intact, though activities like fly fishing and kayaking remain incredibly popular on its waters. This lake is also home to several islands. They include Ruby Island, the closest and most accessible island from Wānaka Township, and Mou Tapu, a scenic reserve that’s critical habitat for local wildlife such as mountain stone weta and Southern Alps gecko. 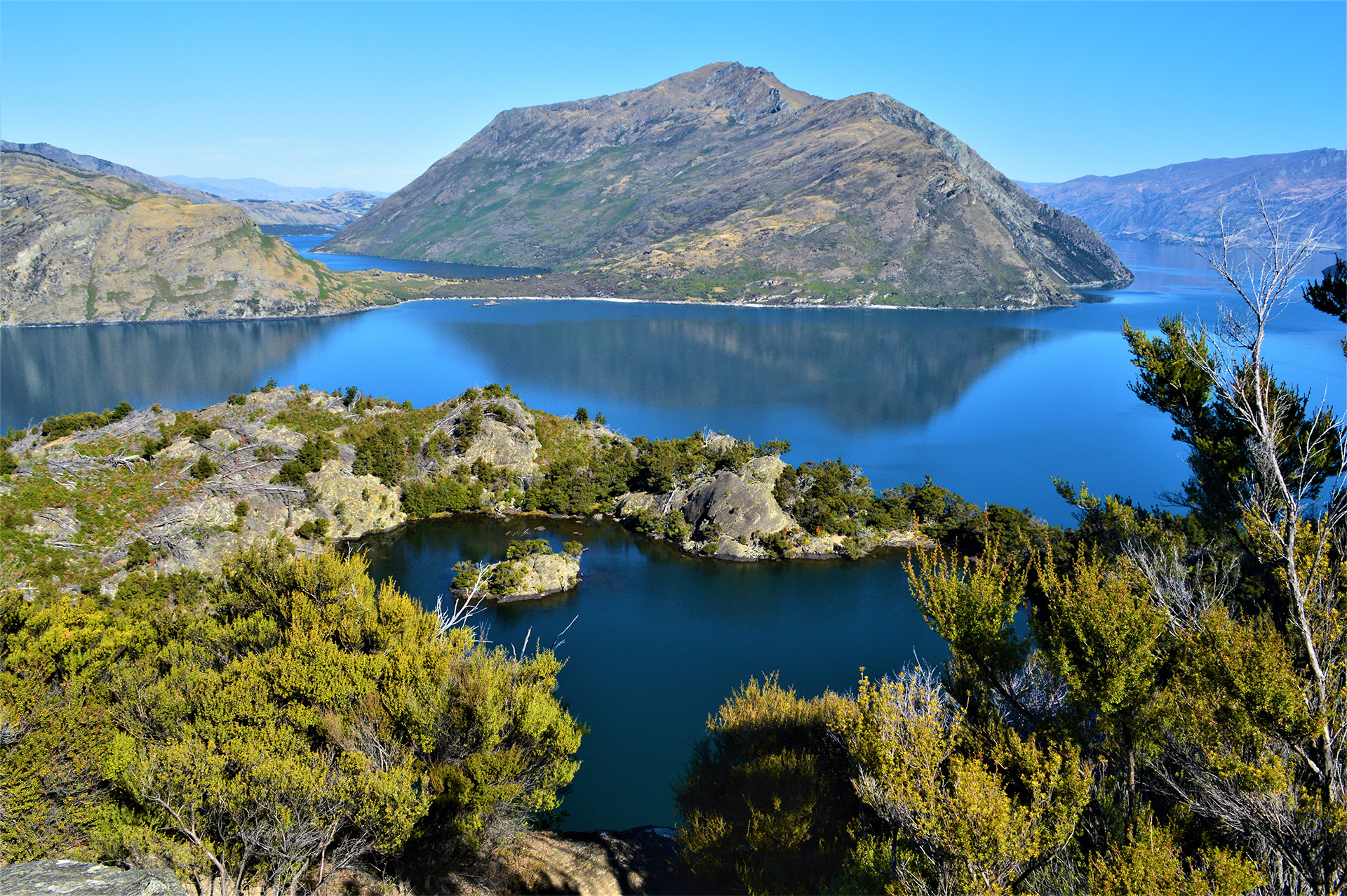 This lake-within-a-lake sits at the summit of Mou Waho, one of the islands on Lake Wanaka. Nat Hab’s New Zealand Explorer expedition visits both the island and its lake, which is known as Arethusa Pool (older names include the Māori named Moutimu and Paradise Lake), via a private boat cruise. 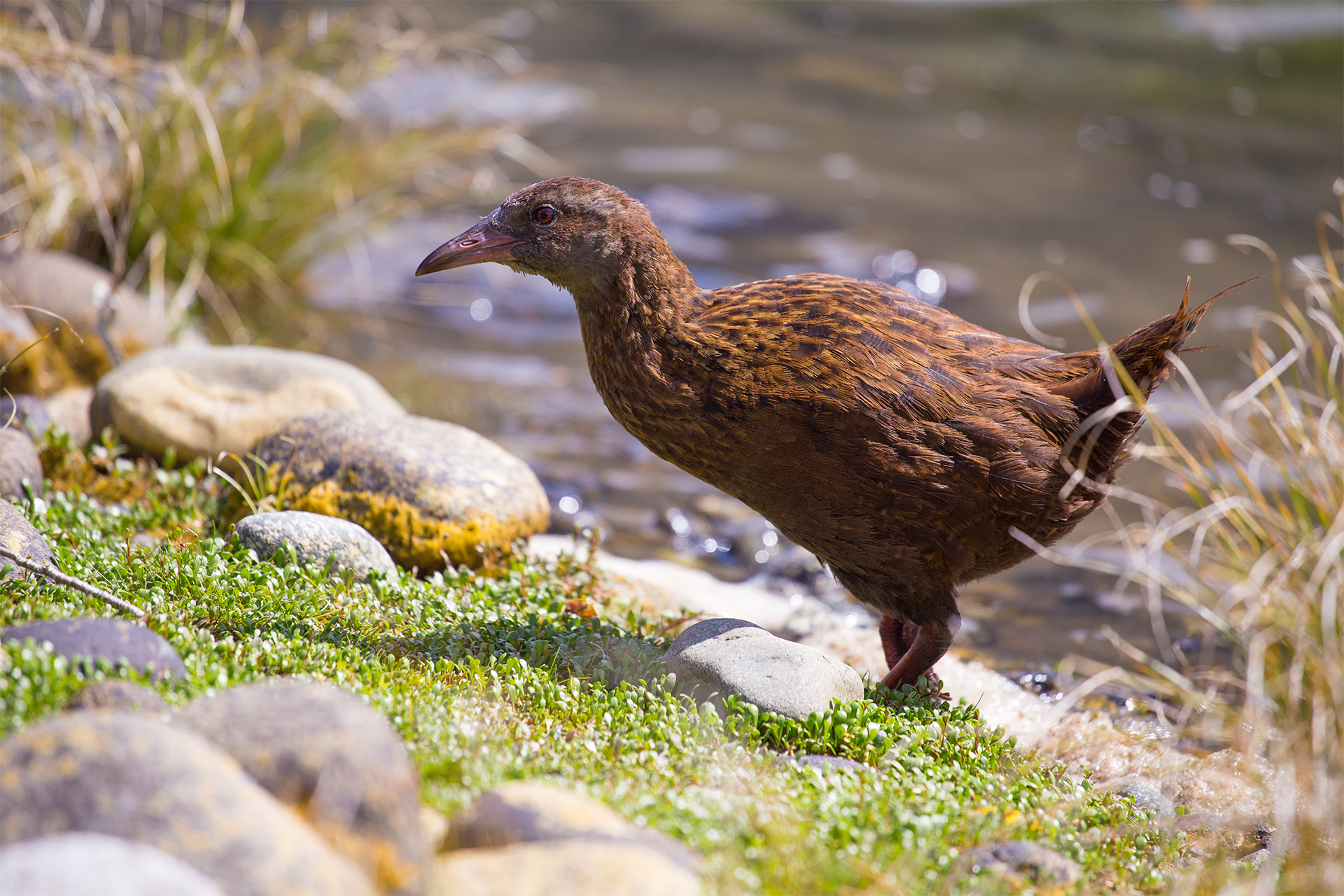 Not only is the island a predator-free nature reserve housing the rare buff weka, an endemic and flightless bird that’s been extinct on the mainland since 1920, but its lake boasts panoramic views of the Southern Alps and the waters of Lake Wanaka to boot. The mountain stone weta, a prehistoric insect that’s a nocturnal grasshopper relative, also resides here. 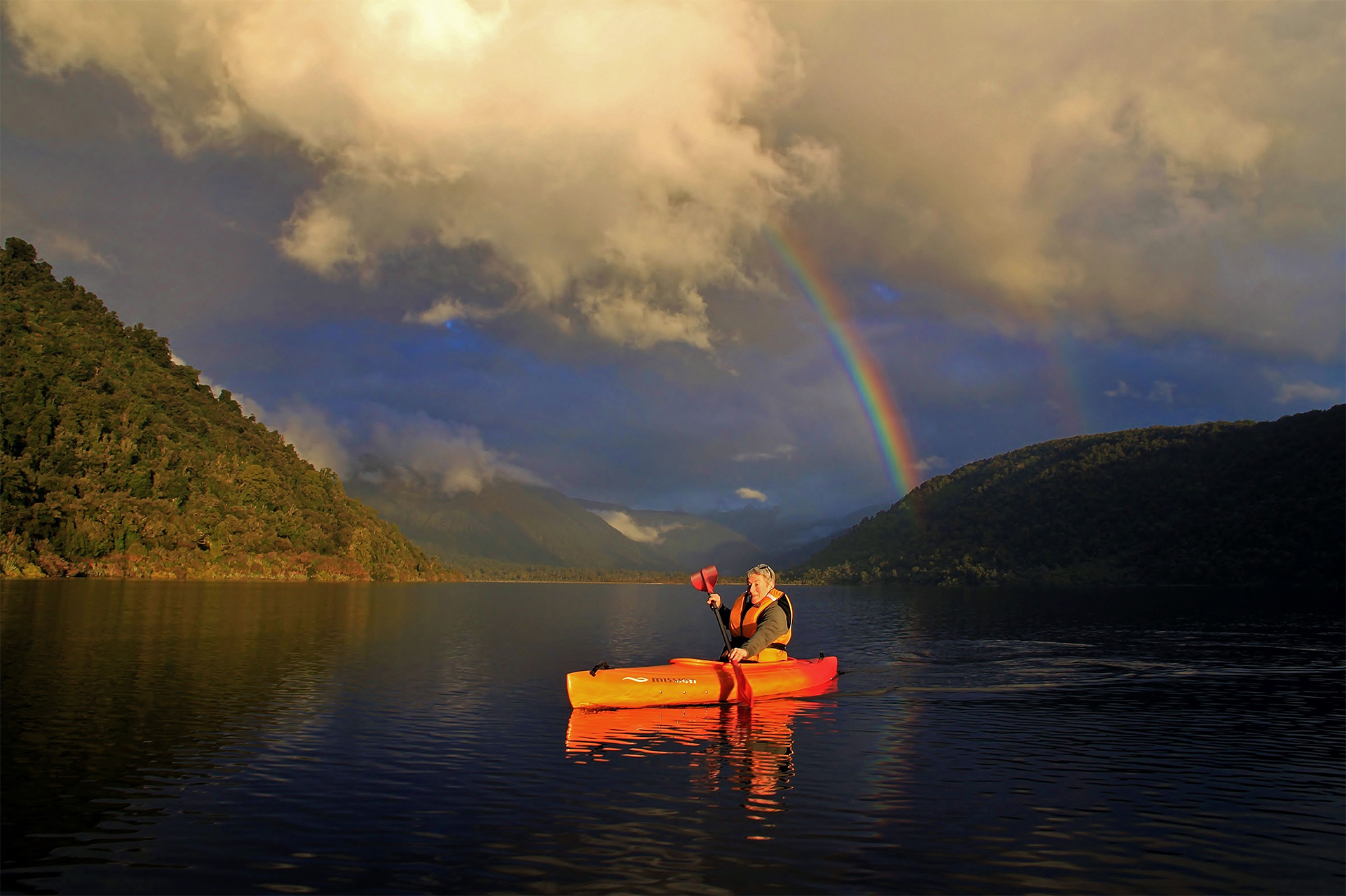 Situated along the South Island’s west coast, Lake Moeraki is a part of the larger Te Wahipounamu World Heritage Site, where rocky coasts, towering cliffs, and rumbling waterfalls share space with southern beech and ancient conifer forests. The lake itself boasts calm waters and magnificent views of the Southern Alps in the distance, while the surrounding rain forest is a hub for native wildlife such as alpine keas and endangered takahe. 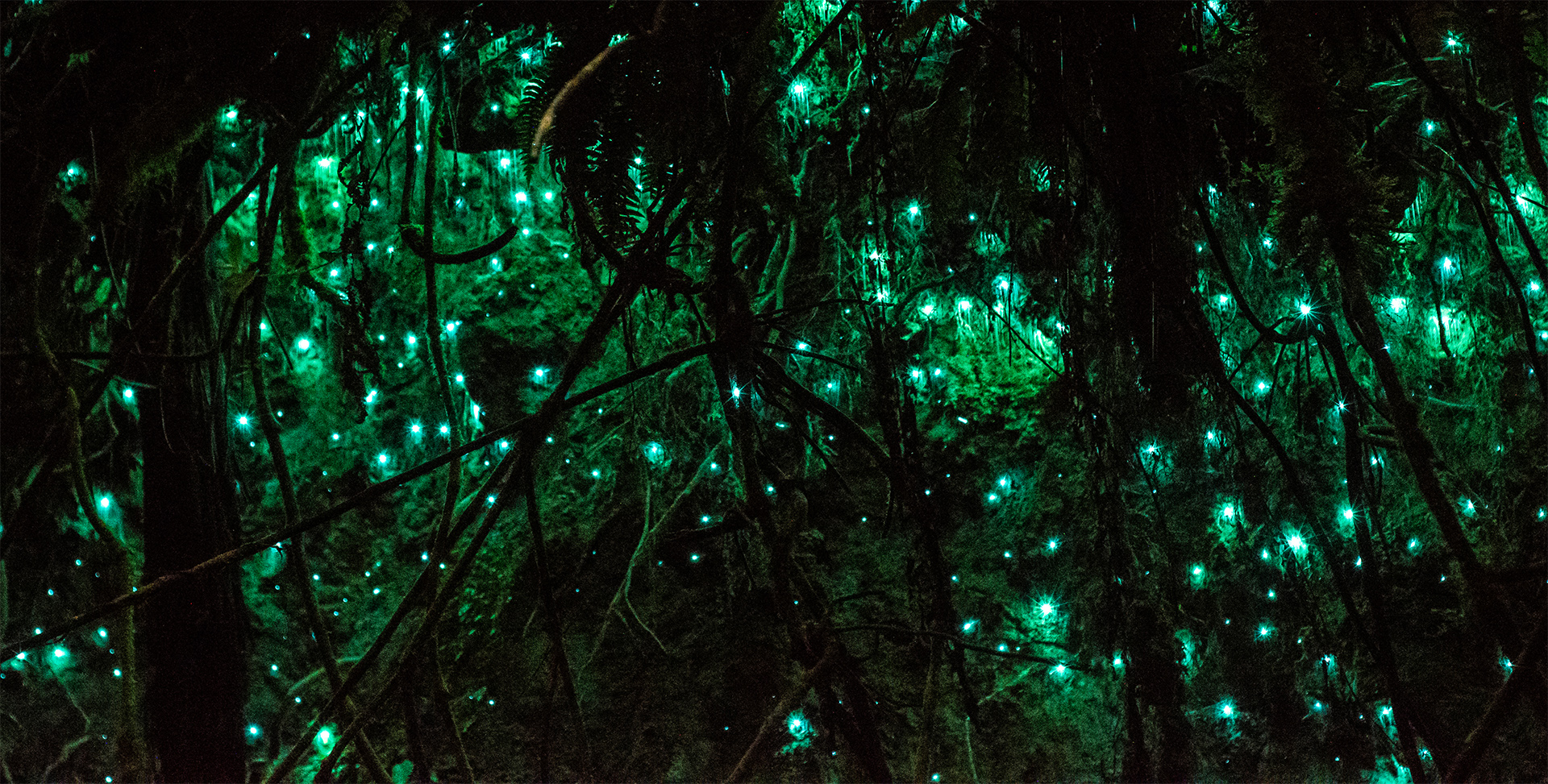 Towering ferns, often illuminated by glowworms in the evenings, line the way to the nearby Monro Beach, a remote stretch where Fiordland crested penguins (mid-size penguins endemic to New Zealand), nest in October and November. These penguins are especially unique, being the only species of their kind that breed in temperate rain forests. While here, keep an eye out for New Zealand fur seals, sea lions, and Hector’s dolphins either on the beach or in the waters. 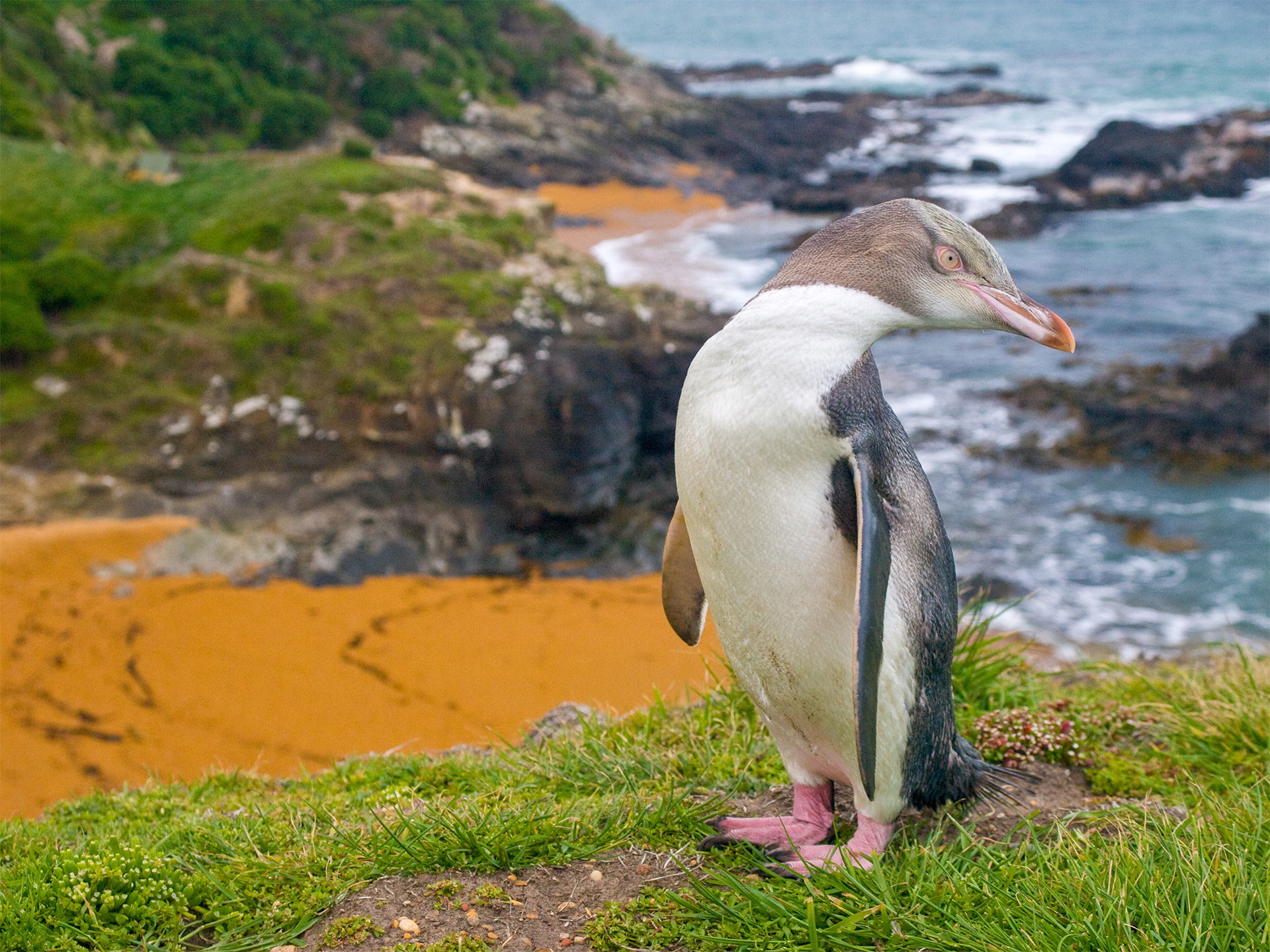 Part of the Moana Rua Wildlife Refuge, this tranquil high-country oasis is tucked between the steep limestone mountainsides of Castle Hill, a scenic stop on the South Island’s Arthur’s Pass Drive.

For early local Māori, the lake was known as a mahinga kai, a food bowl site, and remains in pristine condition. There are no motorized boats allowed since Lake Pearson remains a haven for birds like the southern crested grebe, a distinctive-looking avian that dives for food in the lake’s waters.

The lake is popular among picture-takers for its large, hourglass shape. 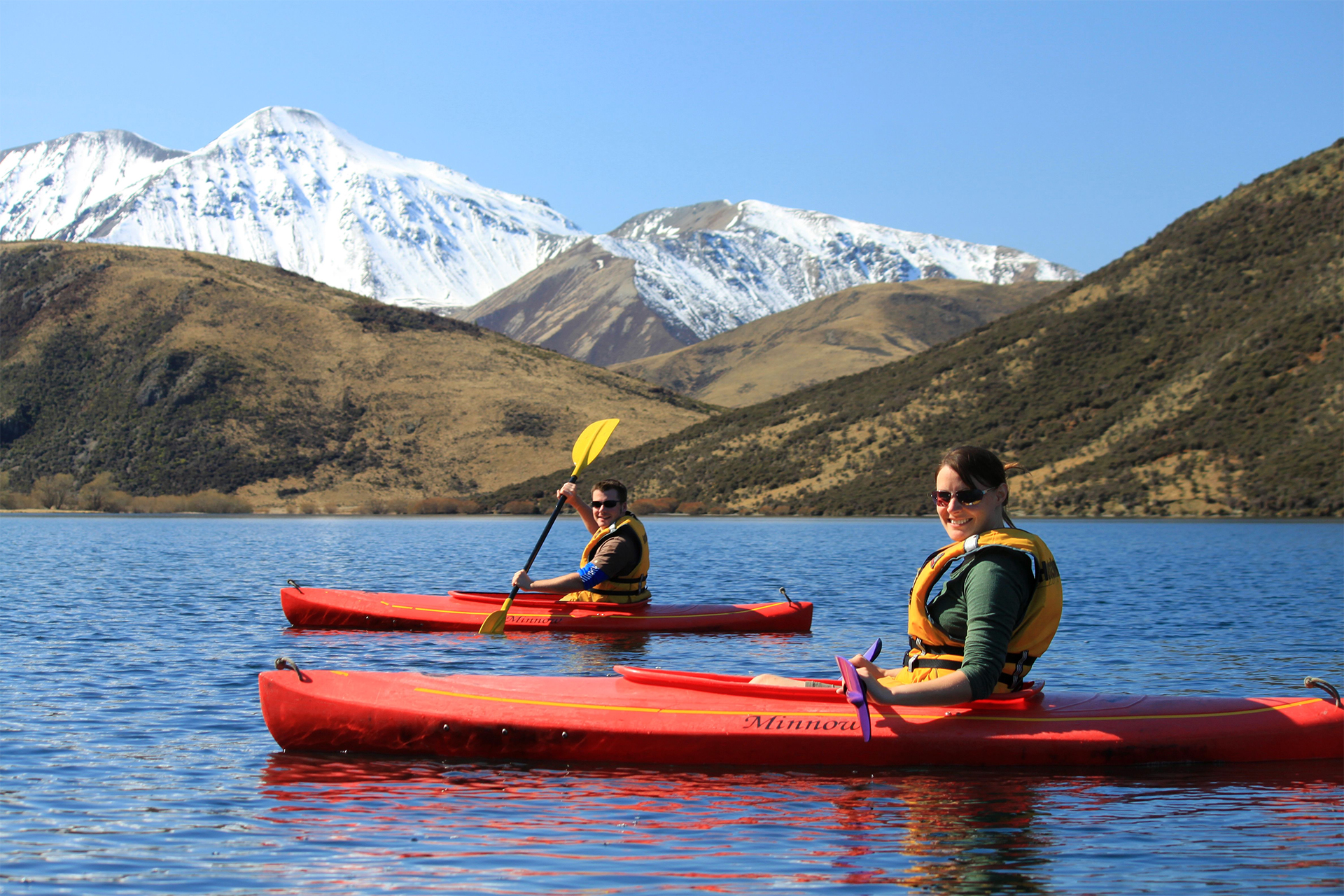 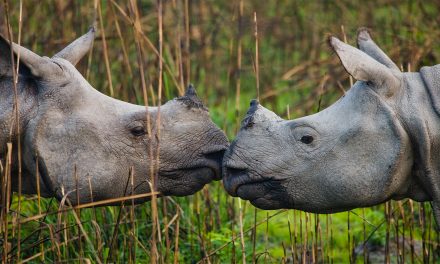 Baby Animals in the Wild: Growing Up in India, Nepal and Bhutan 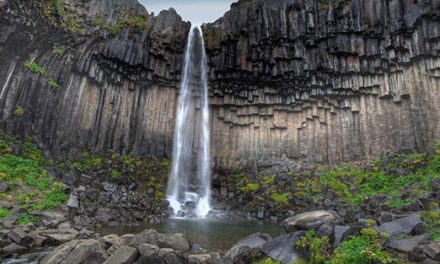 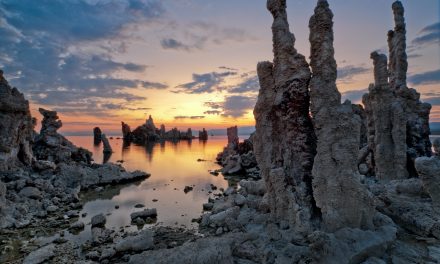 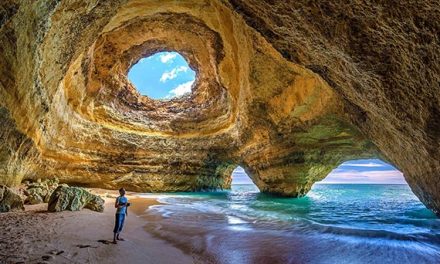